The Center for Medical Image Science and Visualization, CMIV, is a multidisciplinary research center at Linköping University. The center specializes in combining computer tomography and magnetic resonance imaging with advanced visualization technology in order to develop methods and tools for image analysis in health care and medical research. The diversity of projects such as digital pathology and brain, heart and fat research as well as the interdisciplinary focus of the center bring a mixed group of people together: engineers, technical and medical researchers, visualization specialists, etc. are all involved in the center and its research.

In 2016 CMIV wanted to upgrade its visualization room Wrannesalen from its existing 3D-solution to a top-notch visualization system. As the new system was to be used as tool for image analysis in lectures, meetings and conferences the demands on image quality were very high. The system had to have high image resolution and had to depict a high level of detail in the grey scales, as the displayed radiographs only comprise of variations of grey. The visualized images had also to be as good as pictured on medical grade monitors and lightboxes. Furthermore, there were to be no reflections at all on the screen as this side effect of display screens can disturbe the audience’s experience.

The Wrannesalen being used for education and lecturing, the system had also to include the possibility to record the lectures for future purposes. As a range of users would manage the system, it had to be highly flexible allowing different image sources as well as it had to have a control system adapted for multiple user levels.

After thorough examination and scrutinous evaluation NANCO was entrusted with upgrading the Wrannesalen at CMIV in Linköping to a complete powerwall with laser technology. The set-up would comprise of a 3.9 * 2.1 m large laser coated glass screen, with the screen’s diffuser layer facing the audience to minimalize reflectivity and a 6P RGB laser projector for high image quality. Such a projector consists of two sets of 3P RGB laser primaries for stereo projection. As lasers truly produce monochromatic primaries and three lasers combined produce the broadest color gamut available, the viewer can with this technology perceive more colors in the projection. This laser projector has also a resolution as high as 4096 * 2160 px enabling the viewer to distinguish more details.

The laser projector needed 4 m to project the image onto the approx 4 m large screen, while the available space behind the screen was only 2.7 m. Just as in other projects where the required projection distance is missing, NANCO used a mirror to create a mirrored projection to “overlap” the missing space. To avoid any secondary projection NANCO and Barco meticulously calculated that the mirror had to be placed exactly 3 m from the screen. An extra 30 cm were therefore created – as you can see in the image below. 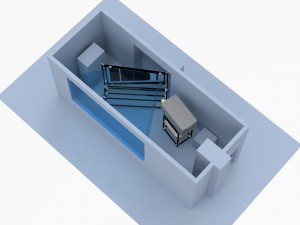 Mirrored projection with extra room for the mirror 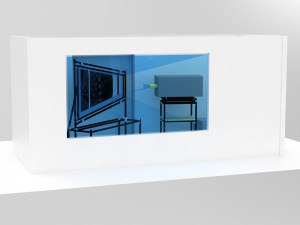 Challenges
No installation is ever free of challenges though. Knowledge, experience and detailed preparation is NANCO’s combined ace in the field! So, what challenges did appear?

There was simply only one way in: through the emergency room and the maternity ward. Hospital regulations permitted this special delivery and transportation only outside emergency peak time, which was on Tuesdays between 05.00 and 06.00 am. Trucks weren’t allowed at the ambulance emergency though. So, the truck arrived at 04.00 am to unload as fast as possible, while NANCO staff were constantly in direct contact with an emergency nurse in case of an ambulance emergency. The entrance and two 90 degrees turns in the corridors were an extra challenge: the glass was too high for the entrance and the doors while too wide for the turns. NANCO had therefore two special Barco trolleys delivered with which it was possible to lower respectively raise the glass to pass each challenge along the way.

The delivery and transportation was therefore rather complicated and tight. Once the truck arrived at 04.00 am, two small trucks unloaded the larger one as fast as possible.

While a glass robot with suction pads then lifted the glass screen out of its transportation box onto the two special Barco trolleys, the truck finished its unloading at the loading platform for deliveries.

At the entrance and at every other door the trolleys’ height was then each time lowered to pass through and at each 90 degree turn the trolleys were set to a higher height to pass the turns. A procedure that needed to be repeated a couple of times… At precisely 05.53 the screen had successfully been transported through the emergencies! 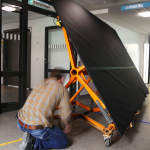 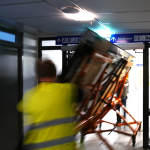 However, the robots were not allowed to pass through the emergencies. The elevators were luckily large enough for the robots, as they were needed upstairs to lift the 250kg heavy glass screen from the trolleys into place. At 07.15 am on that same morning the screen was in place. Watch the installation video here:

The wall had to be rebuilt and adapted to fit the new screen and a 50 mm frame was manufactured by Barco to maximize screen size as required, allowing the entire seated audience to view the projection. It was precision work to get the 3.9 * 2.1 m large and 250kg heavy glass screen in place as there was only 1mm tolerance on each side of the screen and its coated side was in no case to be touched. 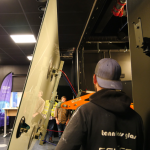 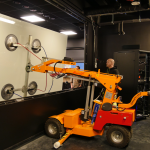 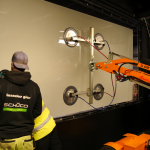 Finally, thanks to the successful cooperation with Barco and to NANCO’s thorough planning and hard, but effective team work the removal of the previous set-up, the installation and the testing of the new visualization system was successfully accomplished on the 15th of June.

The Wrannesalen at CMIV in Linköping is now fully equipped with Sweden’s first “laser powerwall”: a 3.9 * 2.1 m laser coated glass screen with a 6P RGB laser projector and 4K computer delivering the widest gamut and the highest resolution available. CMIV is now the proud owner of the first 6P RGB laser projector installation!

The existing sound system including wireless microphones and the video conference system as well as a tracking camera for recording lecturers, presenters and such, and stereo glasses for the audience were all connected to the set-up and tested. CMIV’s in-house computers for medical visualization were connected to the system as well. Finally, the control system developed by NANCO on IPad Pro including i.e. multi image sources, multi user levels, user authorization and registration was successfully integrated and tested.