Further upgrade to expand the virtual possibilities even more

Since 2011 and 2012 respectively Volvo Cars has enjoyed its powerful evaluation and presentation tools in the VR-studio: a 3m*3m*2.4m large cave for total immersion installed by NANCO 2011, a 11m * 2.9m wide powerwall for exterior environment experience and a 2.2m * 1.2m conference area to introduce and discuss ergonomics and design, both installed by NANCO 2012. Read more about this story “Combining a cave and a powerwall in one room”, its challenges and solutions.

2015 called for further expansion. Volvo Cars decided to upgrade both its VR-studio and its other virtual reality studio – here called the VR-theatre to distinguish the VR-centers from one another. The objective was to enable parallel viewing. As the VR-studio is highly popular downtime was required to be minimalized.

In 2012 four first generation Barco 4K-projectors were installed in the VR-studio. Back then four projectors were needed as these first generation projectors couldn’t handle 4k resolution in stereo. To obtain 4k stereo mode passive stereo was therefore used with one 4k-projector for the left eye and one for the right eye, which made a total of 4 projectors to cover the 11m wide screen with mono or stereo projection. Volvo Cars planned now (2015) to upgrade these projectors from 4K mono capacity to 4K stereo capacity.

The VR-theatre on the other hand consisted of a smaller theatre, hence the name, a 7m*2,2m glass screen for projection and ten projectors dating from 2007. For its upgrade Volvo Cars wanted to replace the outdated projectors by two newer ones.

June-July 2016 – This project was straight forward.

The VR-studio: in order to visualize 4K in stereo only two of the four mono projectors would be needed after their upgrade to 4K stereo projection. Two 4K-projectors were therefore moved to the VR-theatre. The two remaining projectors were then upgraded from mono mode to active stereo for Active Infitec+ by upgrading the electronic parts and the Infitec system.

As the technique of mirrored projection would not be used in this project, the two projectors had to be placed in a specific position approx. 4m from the screen in order to project a 7m*2,2m image. The room being too small, one projector was successfully placed into the unused elevator shaft that occupies one corner of the projector room. 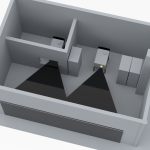 One projector placed into the unused elevator shaft that occupies one corner of the projector room. © NANCO 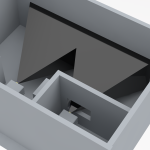 The VR-theatre: NANCO took down the ten projectors, dismantled the supporting mechanics and rebuilt the aluminum profiles to suit the two projectors that were being relocated from the VR-studio. The two 4K-projectors were moved from the VR-studio and installed in VR-theatre and a new audio system, a new matrix switch as well as a new control system were then installed.
The upgrade and installation were successfully achieved within one week, thus limiting the downtime to a minimal.

Volvo Cars’ virtual possibilities have now even more expanded: an upgraded VR-studio visualizing in 4K stereo and an upgraded 4K VR-theatre. Both ready for extreme performance!