The 4K dream ahead of its time

In 2004-2005 Volvo Group Truck Technology’s design department in Gothenburg wanted to be able to visualize its truck cabs 1:1. The envisioned projection area would mainly be used in the designers’ daily work, more specifically in their quest to understand the model by experiencing it 1:1, and as a projection tool for large conferences.
When it was decided that a projection area as large as 7m * 5m would be installed i VGTT’s show room, the challenge was – this being the early 2000s – to create such a large homogeneous and high quality image.
An additional challenge was that large projection screens as this one, being much like an enormous movie screen, are never completely flat and are often subject to movement due to air pressure and air conditioning, thus affecting image quality.

To project a homogeneous image onto the 7m * 5m wide flexible rear screen, NANCO used 16 projectors, each controlled by its own workstation. Remember that this was before the 4K era! 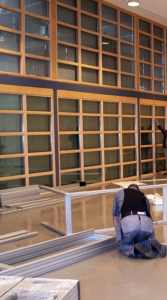 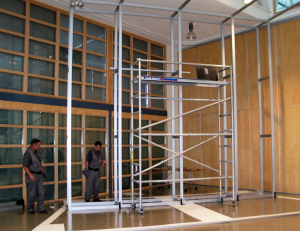 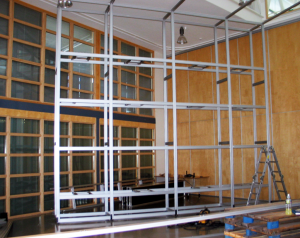 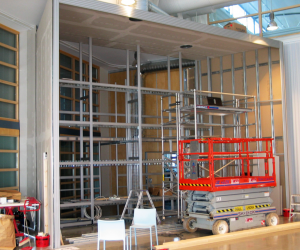 In order to manage the 16 workstations and the extra workstation for the applications as well as to meet the high image quality requirements, 3DEXCITE DELTAGEN, delivering both, was installed. The entire setup was then controlled from the operator desk, including a screen and a touch screen.

As the projection screen was submitted to air movements affecting the image quality the projectors had to be manually calibrated regularly.

Controlling the entire setup from the operator desk

By 2013-2014 VGTT wanted to upgrade its visualization area with new systems, a brighter screen, an extended audio system and improve computer performance. The challenge was to implement the upgrade within the same visualization area, i.e. without any impact on reserved space to show case 3-4 trucks 1:1 in the exhibition room.

By then 4K projectors were available, which would have solved the previous challenge of creating a 7m * 5m large homogeneous and high quality image. But as  4K rear projection alternatively 4K mirrored rear projection require more space than what was available in the given setup, none of these projection  alternatives were an option.