In 2018-2019 NANCO revisited Volvo Group Truck Technology’s design department in Gothenburg, where we in 2004-2005 installed a 7m * 5m wide powerwall visualizing homogenous and high quality 1:1 truck cabs and where we later on in 2013-2014 implemented a complete upgrade of all 16 projectors and workstations as well as included automatic calibration. Read more about VGTT and The 4K dream ahead of its time.

Volvo Group Truck Technology was back then ahead of its time: all solutions were great solutions at the time, adapted to Volvo’s specific demands and the given setup, where e.g. required space for 4K (mirrored) rear projection wasn’t available. Nonetheless, a 7m * 5m large projection screen, similar to an enormous movie screen, is never really completely flat or still, due to air pressure and air conditioning, which affects image quality. Using multiple projectors to display each section of a single image automatically results in the image being divided by small seams, which is compensated by using a softedge blending technique for a  smooth transition of edges resulting in a seamless image. Even if this process is managed by automatic calibration, it is nevertheless time-consuming.

The devices reaching their life expectancy as well and VGTT wanting to keep up with today’s technology, time had come for a major upgrade aiming for high-quality 1:1 projections, which – translated, requires a 4-5m large image.

Eliminating both the problem with the current acrylic screen susceptible to air flow and the continuous calibration of the 16 projectors:

On the one hand, a LED wall could be a solution as it is fixed, smooth and flat, available in any size, offering good brightness and contrast and having no need for rear projection and thus extra space. The drawback in Volvo’s particular situation would be the LED display’s pixel pitch, which similar to pixel resolution, influences the optimal viewing distance: even a screen with pixel pitch as small as 1.2mm, still requires a minimum of 2.5m for optimal viewing, i.e. if you don’t want to actually see every single light emitting diode.

On the other hand, Barco had just launched its RigiFlex: a thin and lightweighted roll-up powerwall for rear projection that does not shake, even ever so slightly, thanks to its very high-tension surface, available in sizes up to 10m * 4m.

This screen solution would require rear projection and a very bright projector to compensate for the natural light flow in the enormous VGTT studio and show room: such a large 4K projector would thus require extra space which was not available yet. The disadvantage of this option would be that the projected image would not quite be 1:1.

Finally, weighing all pros and cons of such an investment, it was decided to install the RigiFlex screen for rear projection, which meant demounting all 16 projectors, disassembling the 7m * 5m framework, emptying the studio, moving the projection area forward as to create extra room for rear projection, installing the 60,000 lumens 4K RGB laser projector, the powerwall and the control system.

By the end of 2019 NANCO had successfully installed a completely new and up-to-date visualization area in Volvo Group Truck Technology’s design studio and show room in Gothenburg including: a 7.5m * 4m powerwall, a 60K lumens 4K RGB laser projector with stunning brightness levels and most advanced colour and image quality, and a control system for managing an array of image sources, i.e. Volvo workstation, high-end graphic station for realtime 3D graphics, laptop, laptop in 4K, Apple TV, ChromeCast, topped with the possibility to connect extra monitors. 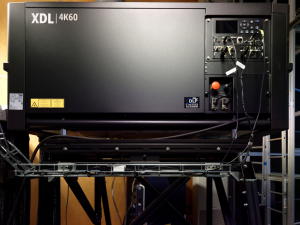