Augmenting the automotive industry with a powerwall and a cave

Airic is the automotive industry research and innovation center of SAIPA, a major car producer in Iran. Airic’s research and design department house a brand new model workshop, a design and construction division and a virtual reality center.

The next phase in the development of Airic was to integrate both a 6m*2,5m large powerwall and a three-sided 3m*1,8m cave in the VR-center. NANCO was entrusted to realize this enormous project abroad.

Even though the bar was slightly raised due to the fact that the project was located in a foreign country, the challenges did not increase in number nor did they differ in nature compared with previous domestic projects. This project’s challenge appeared during the final mounting of the powerwall as a crane, usually used to lift heavy glass screens into frames, could not be utilized.

This project being large was carried out in three steps:

The framework for the powerwall and the projectors

When all the components were delivered at the virtual reality center NANCO first mounted the mechanics. In cooperation with Alucon, a Swedish company specialized in constructing and assembling aluminum structures, the powerwall frame, the framework for its 12 projectors, the three frames of the cave and the framework for its 3 projectors were successfully assembled.

The framework of the cave

Assembling the powerwall frame and the framework for the projectors:

Building the structure for the cave-to-be

The powerwall’s projection glass had already been delivered at the VR-center located on the fourth floor. In order to lift such a heavy projection glass into its frame a crane with suction pads is normally used. Unfortunately the elevator, planned to lift future cars up to the fourth floor, couldn’t be used to lift the necessary crane as it was not completed yet. It was therefore decided to hire ten Iranian glaziers to unitedly handle the 500kg glass screen using suction pads. 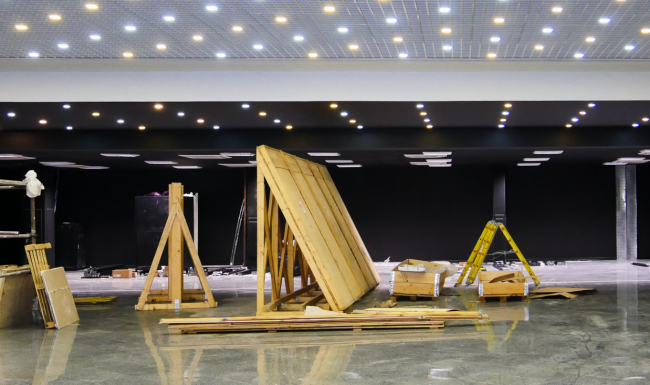 The projection glass delivered on the fourth floor

The standard glazier technique to manually lift the glass out of its box, balancing it and putting it into position was though far too risky due to the heavy weight. It was therefore decided to use clamps to tilt the entire transportation box placing the screen into an almost upright position and extremely close to its frame. The tricky part in this enterprise was the significant danger of tilting as the 300kg of the transportation box added to the 500kg of the screen created a combined pressure of 800kg. The transportation box was therefore professionally secured in all directions with clamps and straps. Once the screen was in the desired upright position close to the frame, the final lift was then skillfully achieved by NANCO and the Iranian glaziers using suction pads, precision and extreme precaution.

Preparing for tilting the glass screen

The glass screen in its frame

In comparison with the powerwall’s dimensions and the weight of its glass screen, the cave was easier to raise as its walls were smaller and made of acrylic, which is a lighter material. With the help of 2-3 glaziers NANCO manually raised the three 3m*1,8m walls into place.

Step 2 – April 2016: installation
During this part of the powerwall and cave project NANCO installed a total of 15 projectors, 15 image processors, 15 computers, 2 workstations, 2 track systems and software in cooperation with Barco NV Dubai, who was mainly responsible for image calibration. 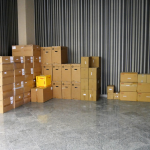 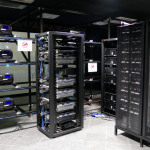 The projecting side of the powerwall – with maintainance lighting on 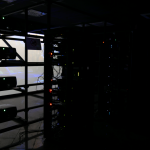 The projecting side of the powerwall – with maintainance lighting off 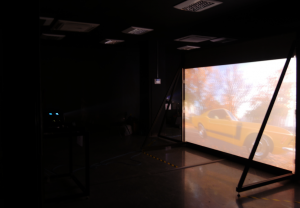 The projecting side of the cave – front side 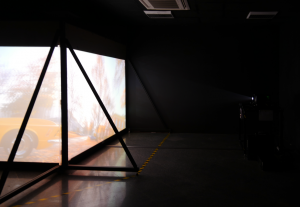 The projecting side of the cave – left side

Step 3 – June 2016: education and adjustments
The final stage was devoted to the training of staff members while taking the opportunity to make some further adjustments. The training was entirely in English and was divided in two major parts: first a basic course for a larger group training in 3DExcite Deltagen software and in the operation of the powerwall and cave followed by a more practical oriented course for the four operators to-be.
Final adjustments were made by creating additional functionality, track targets and virtual car models and by calibrating. 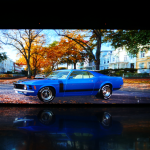 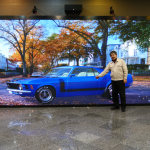 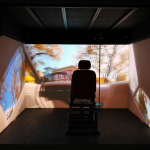 Airic has now a completely integrated 6m*2,5m powerwall and a 3m*1,8m cave in its VR-center as well as a fully trained staff and operators ready to maximize the virtual experience at the center.