As part of Stockholm Region’s investment Life Science the Technology for health building was planned to be built adjacent to the Karolinska University Hospital in Huddinge. The vision was to bring together
•    KTH, The Royal Institute of Technology/ STH, The School of Technology and Health
•    The Swedish Red Cross University College
•    The Karolinska University Hospital Huddinge
•    Karolinska Institutet
•    The Center for Advanced Medical Simulation and Training (CAMST)
•    The Clinical Science Intervention and Technology (CLINTEC)
to strenghten cooperation, to combine health care, research, education and medical development as well as to develop the interdisciplinary area of technology and medicine.
A visualization room was therefore an obvious component and was to be built on the seventh floor of the building, right above its garage. By the 1st of July 2016 the building was to be ready to move in to.

NANCO was entrusted with designing the visualization room’s projection area and installing a 4m*2,1m large glass screen for rear-projection. The screen was though far too large to fit through the planned entrance of the room. More logistical challenges, partly due the nature of the construction site NANCO had to operate on, appeared on site on the day of delivery.

Step one.
Based on NANCO’s previous experiences with large screens not fitting into entrances, it was decided that the screen would be delivered before the visualization room was built. The final installation of the projection screen would then be performed in the next step of the project, when the walls of the room were completed.

As the screen was large it would be lifted and hauled in the room through the window on the seventh floor. This asked for an additional solution as the building had only a gaping hole in its facade without any ledge to offer support to the incoming load. In the planning process it was therefore decided that, as the construction company prioritized safety on site and therefore applied rigorous security measures, the construction company would build a 12m high pipe construction supporting a 5m*3m ledge.

On the day of delivery in September 2015 it became clear that the heavily trafficked and vigorously regulated construction site offered some challenges in form of a 7-8m narrow passage for delivery and a 30 minutes short time slot for unloading the 250kg heavy screen, lifting it seven storeys high and hauling it in the room. 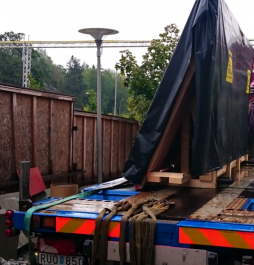 Moreover, the planned pipe construction was not in place on arrival, which caused some initial stress. As soon as this was pointed out the construction was initiated and completed before the crane truck arrived and the time slot started ticking. 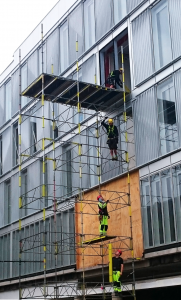 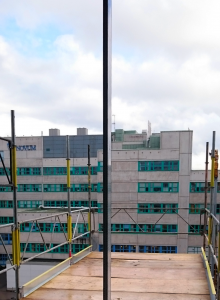 with the supporting ledge

Despite the narrow passage and the limited delivery time the glass screen was successfully lifted and hauled in the building’s future visualization room. 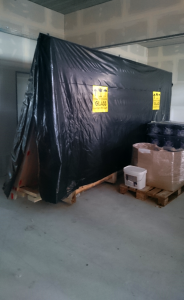 Step one: the glass screen and 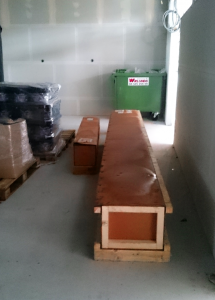 its frame are in the future VR-room

Step two.
When the walls of the visualization room were completed by April 2016, the second part of the project was launched: the installation of the projection screen. As the screen weighed up to 250kg an electric stacker was needed to bring it into place and lift it in its frame in the wall. Any heavy machinery was though strictly prohibited because of the new carpeted floors. Placing 1 masonite board under the stacker and nine in front of it the stacker was gradually and patiently operated into the room, where it finally and skillfully lifted the screen into its frame in the wall.

Mounting the frame of the glass screen: 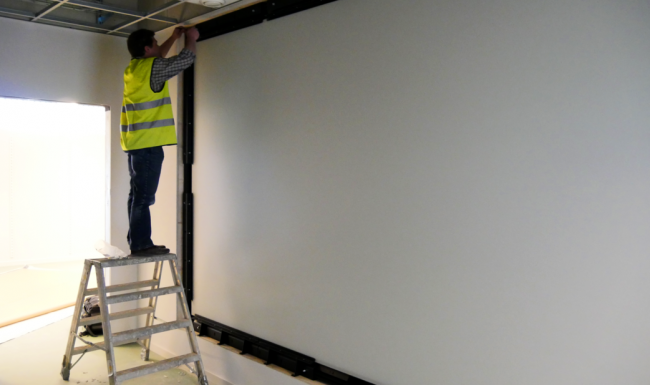 Step two: mounting the glass screen and putting some finishing touches to the frame

The Technology for health visualization room has now a 4m*2,1m large glass screen for rear-projection and is prepared for laser projection.